Fiber-optic cables have changed the way people process information. They are used to transmit a large amount of information every day, and people are able to stay connected through the use of the internet by utilizing fiber-optic cables on a regular basis, even if they aren’t necessarily aware of the fact that they’re using them. Now, some researchers believe fiber-optic cables could also play an important role in studying earthquakes!

Telecommunication companies started installing large amounts of fiber-optic cables underground years ago, even though they didn’t use many of them at first. They were simply anticipating the growth of fiber-optic networks. However, they did eventually end up using many of them years later, while fiber-optic technology advanced so quickly that many of those fiber optic cables are now sitting unused underground. These unused cables are referred to as “Dark Fiber”. Dark fiber refers to unused fiber-optic cable, because most of the time companies, like Craw-Kan, lay more lines than what’s needed in order to curb costs of having to do it again and again. The dark (unused) strands can be leased to individuals or other companies who want to establish optical connections among their own locations. Some companies and groups like the Lawrence Berkeley National Lab in California have the opportunity to use them to study earthquakes that take place in the state.

Traditionally,  seismographs are used to measure the vibrations that take place deep underground during earthquakes, and they still rely on them in many areas. However, “dark” fiber-optic cables are being used to study earthquakes. They are able to study the way light signals pulse through these cables during an earthquake to generate data, and this has proven to be extremely helpful because there are a lot of fiber-optic cables located in areas where it would be too difficult or expensive to install seismographs. For example, tracking earthquakes underwater and in certain urban areas where researchers wouldn’t be able to install seismographs deep underground.

The thought is that researchers might be able to better equip cities to handle the effects of earthquakes through fiber. They could potentially prepare cities by providing them with data on everything from the moisture levels of the soil located underground to the softness of the soil that could be affected by an earthquake. It could prove to be incredibly useful information, and it’s all because of the presence of fiber-optics cables.

HISTORY OF EARTHQUAKES IN SEK & OKLAHOMA

According to a study by the Bulletin of the Seismological Society of America in 1956, 38 earthquakes which have affected Kansas; 22 of these have occurred within the state’s boundaries since 1867. There were 2 moderately strong ones—on April 24, 1867, and January 7, 1906. A frequency plot reveals that a moderately strong earthquake occurs in the state approximately every 40 to 45 years.

There have been reports on earthquakes felt in Southeast Kansas all the way to Joplin, MO with an origin point starting in Oklahoma or central Kansas. There’s speculation around fault systems and human interaction, such as fracking, that have increased earthquakes in the central plains. 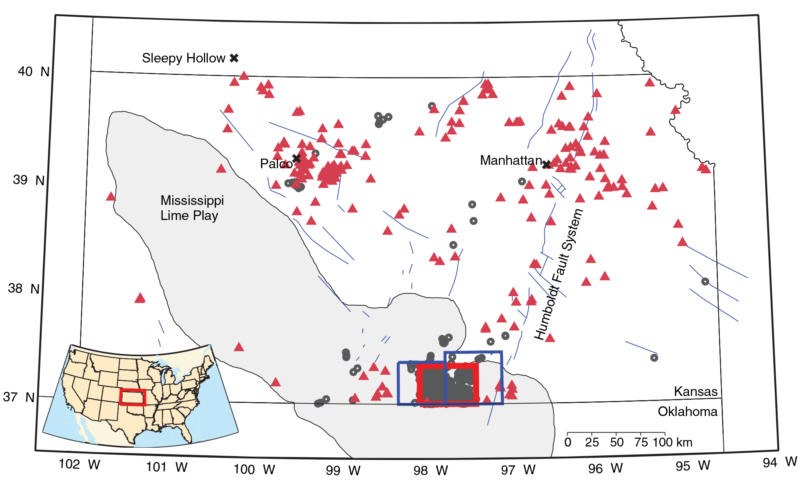